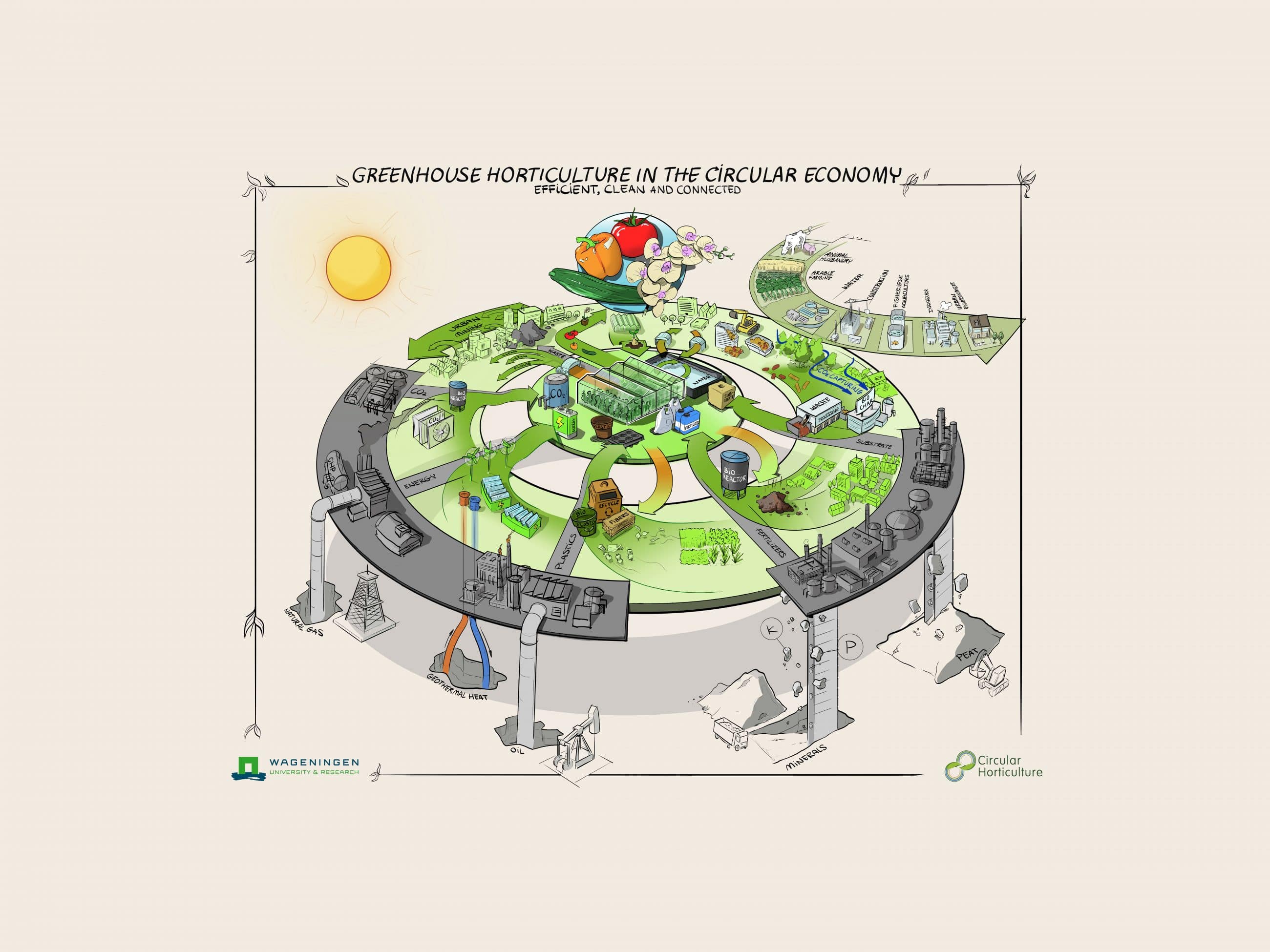 What is circular horticulture?

Making better use of residual flows and new cycles

According  to  Carola Schouten, Minister of Agriculture, Nature and Food Quality in the Netherlands, we are talking about ‘making better use’ of residual flows (such as waste) and ‘closing new cycles’. In doing so, the focus is not on producing the maximum amount of food as cheaply as possible.

Instead, in the transition towards a circular economy, the focus is more on sustainable food production by using natural resources such as soil, air and water. In recent years, for example, the purification and reuse of filter rinse water within the greenhouse has been improved, so that water does not have to be discharged.

“At WUR, we concentrate on a number of fundamental questions that apply to the circular economy,” explains Poot, the son of a tomato grower in the Westland horticultural region. “For example, how do we shift  food  production to more vegetable sources, such as soya, so that people consume less meat? And what’s  the  best possible way to recycle waste streams for food production?”

Plastic soup as a spearhead

A new spearhead that is currently being worked on is tackling the flow of plastic soup within greenhouses. “Plastic is all over the place,” says Poot. “It’s very noticeable in the annual clear-out  of the greenhouses, when we sweep out not only all the plant residue, but also a whole lot of strings, metals and plastic – lots of plastic.” Ideally, these flows should actually be clean and compostable at the end of the cultivation cycle. But that is not quite the case yet, so research is being done into it. “It’s also necessary to have a clean residual flow for initiatives like extracting fibers from tomato stems, which can be used in cardboard boxes.”

“That’s great because then tomato growers can sell their produce in boxes made from their own residual materials. Highly sustainable, very circular and also a wonderful story from a marketing perspective: storytelling at its best.”

No story about Dutch horticulture’s transition to a circular economy would be complete without mentioning the name of Piet van Adrichem, now a retired horticulturist from Pijnacker. He and his brother Wim were the first to venture into a new way of growing: on mineral wool mats, with no soil involved.

Actually, it all started with an article in a trade magazine, which triggered Piet in particular, somewhere in 1969. “I read that there was a ROCKWOOL test greenhouse in Sweden where cucumbers were grown on stone wool. That was something I had to see. So, somewhere in the autumn of 1975, we went on a work visit to Sweden, and also to Denmark.” They couldn’t import stone wool from Denmark themselves and their cooperative didn’t dare to take the risk. ROCKWOOL only supplied to subcontractors. “So I contacted the company Royal Brinkman, who were willing to take up the challenge. We set off together with Royal Brinkman’s Gerrit Dijkstra.”

First, they took a morning flight to Denmark, where they found the remains of failed mats in a small field behind the factory, with plants growing on them. This gave Grodan the idea of professionalizing this into a viable concept for growing fruits and vegetables. The next day, they traveled on to a Swedish town just below Stockholm to see the test greenhouse. “We  soon  realized there was a huge opportunity there.”

Thinking and a lot of trying

Even before their journey, they had immersed themselves in the options offered by stone wool. Internet didn’t exist yet, so it came down to “thinking and trying,” says Van Adrichem. “A lot of trying. We just had to. We were looking for an alternative way of controlling a virus that had contaminated our soil. Steaming took a lot of energy to kill this virus.”

Cultivation is all about how much water is available for your plant. “If you plant a cucumber in soil, the plant has to use energy to obtain water and nutrition. But on stone wool, the cucumber needs a lot less energy. The plant will then put the stored energy into its fruit. However, back then we had no idea that the extra yield would be so high.”

Better and much tastier cucumber

On their visit to ROCKWOOL, Van Adrichem and Dijkstra already ordered four hundred  square meters of mats through Royal Brinkman. And they got straight to work. Van Adrichem: “Back in 1975, together with my brother Wim, I leveled our entire greenhouse in Pijnacker, laid all the mats and switched over completely. It was an instant success. These cucumbers proved to have a better shelf life and better taste, and they even shone more.”

The start of precision growing

Helped by Royal Brinkman, Van Adrichem learned how to minimize water wastage in cultivation. They found the solution in Israel: a system with drip irrigation. It turned out to be the start of precision growing. “Drip irrigation is now common all over the world, from fruit trees to grapes,” says Van Adrichem, “saving lots of water worldwide. The technology was invented in Israel, but because it was used at an early stage on such a wide scale in the Netherlands, it has attracted attention from all over the world.”

The Grodan branch in Roermond

“After Grodan settled in Roermond, the Netherlands, in 1978, things went really fast. They produced special stone wool for our companies in the Netherlands.

Starting with three growers in 1976, by the 1990’s almost all greenhouse growers in the country had adopted stone wool substrate. Less than two years later, in the 1980’s, branch advisors from all over the Netherlands were on our doorstep out of curiosity. Because we could help save lots of water.”

In short, the savings that could be made with stone wool were mainly in energy. Van Adrichem: “The soil no longer needed to be steamed or heated in winter. Meanwhile, production increased by 15 percent per square meter with less energy consumption and no extra crop protection products – all thanks to precise drip irrigation. You can irrigate the soil completely or give the plant exactly what it needs.”

Meanwhile, a solution had already been found for the waste heap of used substrate that suddenly arose as a result of increased demand.

The solution was developed in collaboration with waste processor Van Vliet Contrans, now Renewi. “They discovered that the used substrate was an ideal substance for making bricks. It’s extremely durable and completely circular.

It was the prelude to many more innovations. It just goes on and on. If you look at what they’re working on now for the period up to 2050, it’s really impressive.” 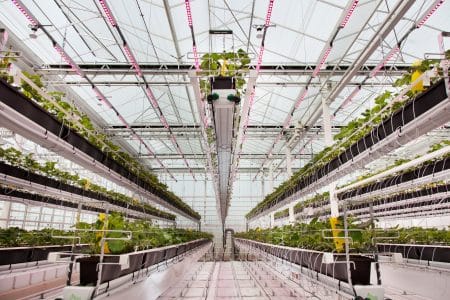 There are plenty of examples of how residual flows from horticulture are reused. They also show directly how high the bar is for the future. “Looking at 2050, we’re setting high standards,” says Marc van Buijtene, Area Manager at Renewi, and born and bred in the region. “Very high indeed.”

Turning iron back into iron, turning wood into chipboard, making paper from paper and creating new rubber bands from old ones. That’s Renewi’s goal, according to Van Buijtene. “In short: achieving 100 percent recycling. And we’re well on track, as our recycling level is already at 93 percent.”

‘Waste no more’ is Renewi’s motto and guiding principle. “We see waste as a raw material,” Van Buijtene emphasizes. “There’ll soon be a huge shortage of raw materials. Oils and minerals are running out; our planet is not inexhaustible. And, of course, most residual products were once raw materials themselves. So we simply turn them back into raw materials.”

It may take a while before they get things right, but at Renewi they never give up. “It took us ten years of pioneering work before we were able to turn used stone wool into bricks, in 1991. It wasn’t the process or technology that took us so long, but our efforts to make it clear to factories why it was so important for their organization.”

Turning plastic back into oil

Take the approach to plastic, for example. “Plastic is made from oil, so it can be cracked and turned back into oil again for new products,” says Van Buijtene. “We’re now using 98 percent recycled plastic and we’re determined to get that 2 percent out as well. We can also recover energy from plastic, instead of extracting new oil, coal or gas from the ground.”

Economic recycling as a sport

However, there is still the problem of who is going to pay the bill. Van Buijtene: “There are still too many customers who often see waste as waste, so they wonder why they should have to pay for it. That’s our challenge: how do we get this so-called waste back into the recycling process in a cost- effective way?”

Van Buijtene laughs. Things have certainly developed quickly in his business. “When I started out as a driver in 1984, I hitched a container to my truck, drove it to a landfill  and then tore off again as fast as I could. I didn’t dare tell anyone about my work. But now when I mention recycling and our vision of the future at a birthday party, everyone hangs on my every word.”

Piet from next door

Or he might start talking about his old neighbor, the founder of circular horticulture: Piet van Adrichem.

"We lived in the same street in Pijnacker. We lived at number 63, and Piet and his brother Wim lived at number 75. It used to be a deserted street where we played as kids.”

But the deserted road got busier and busier. More and more people came to see Piet - the inventor - and his brother Wim - the grower. ‘That Piet is crazy!’ you often heard. ‘Doesn’t know what he’s doing!’ And now look what’s happened.

Piet from Pijnacker has made our country and the world a little more beautiful. And cleaner. It’s nice to be doing my bit for the future on behalf of Renewi, as Pijnacker boys together. On to a fully circular economy in 2050. Following Piet’s footsteps.”